The Italian, Felicity Ward at the Atheneum

May 03, 2013
Birthday celebration no. 2 came in the form of a "surprise" evening organised by one of my dear friends. She picked me up from home and we trammed it into le city, alighting at the promising Paris end of Collins Street, and landing at the foot of the infamous 101 Collins building. (I'm not sure if this building is infamous due to some titillating history, its art, architecture and design, or merely because the nearest tram stop is named after its address. In trying to find this out, it turns out the building has its very own website and Wikipedia entry, neither of which sheds much light on the matter.)

Walk through the spacious, immaculate foyer, past a gazillion banks of elevators, and you will find, neatly tucked in one corner, The Italian. No, this is (sadly) not a tall, dark, handsome man with an alluring accent, wandering eyes and curly hair, but its restaurant equivalent - though maybe without the wandering eyes.

The Italian is generally regarded as a prestigious, elegant venue for high-flying business lunches and secluded dinners of the elite. Indeed, once seated, we realised we were dining in the company (well - surrounds) of a certain former Australian Foreign Minister and member of the Liberal party. I accidentally took a photo of him, but thought it might be unwise to post it. Y'know. Privacy and that. 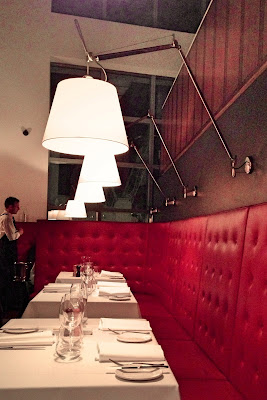 We were seated at one end of a rather masculine, long, red leather booth. I liked the strong colour countered by traditional white tablecloths, and I know they're going for a classy look, but I found the rest of the decor a little bland. On a mezzanine level upstairs, there were more tables and a large wine storage area which you pass on your way to the amenities.

We started with a prosecco and entree of an oyster each, served natural, and croquettes.

Mains were pumpkin ravioli, served with sage, and salmon on a bed of spinach, potato and radish.  Both were beautifully cooked and presented. 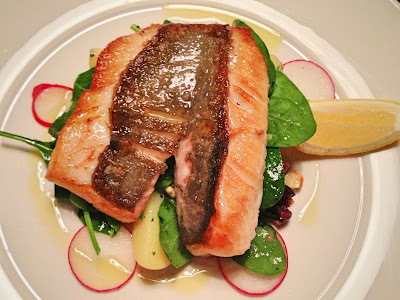 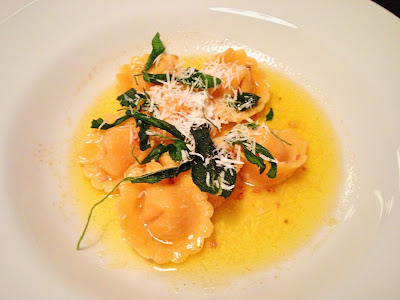 With the meal, I drank wine, and my friend - rather fittingly for the surroundings, I thought - asked for a Noilly Prat (dry vermouth) with dry ginger ale. 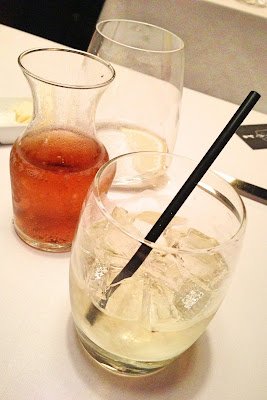 The staff who served us were lovely: polite, full of smiles, and discreet or available as needed. One recommended the chocolate fondant for dessert, and we were not disappointed. It was melt-in-your-mouth stuff. (More like goop-on-your-spoon, actually.)


We were even treated to a selection of petit fours, which we had absolutely no stomach room left for, but they looked lovely:

Luckily, I had worn a pretty long dress - I fear my usual crappy attire would not have cut it at The Italian. It was a delicious meal, and the kind of luxurious affair you only enjoy once in a while (that is, if you're born into fortunate circumstances, and not homeless or suffering poverty in Africa or something).

The remainder of the evening was also happily spent, at Felicity Ward's Melbourne International Comedy Festival show, "The Hedgehog Dilemma", held down the road from The Italian at The Atheneum. It was laugh-out-loud funny (as you would hope) and oddly touching - perhaps because it was the last time Ward would be performing this particular show within Australia, but probably because its content traversed her recent life history, from a shattering break-up to self-realisation, and the development of her comedy career. Its honesty was what appealed most to me, and I went home full of belly and of heart.

Thanks B, for the bee-oodiful birthday evening. xo