January 22, 2013
An institution of Melbourne, Pellegrini's Espresso Bar is one of the first places you are told about when you arrive in Melbourne. It faces street-front at 66 Bourke Street - on the corner of a most artistic-looking laneway - making it relatively easy to find, unlike many of its rooftop-dwelling, laneway-hiding neighbours. Aesthetically, it has an old-school Italian charm, and claims to have imported Melbourne's first espresso machine in the 1950s. 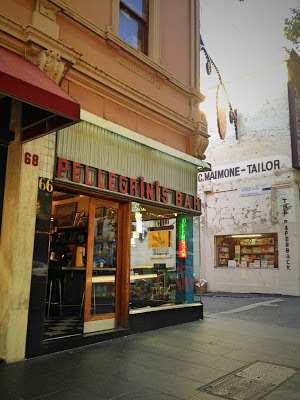 Considering that, it's very disappointing that Pellegrini's uses and makes such terrible coffee. Vittoria! Oh, the shame.

I have been to Pellegrini's several times over my four years in Melbourne, but I honestly have to say this was my most disappointing visit. Sure, it's cheap - but hey, pasta's not expensive to make. Yes, it has character - but so do a lot of places in this wonderful city... and too many 'cons' does not a 'pro' make.

There is a long bar/counter that runs down one side of the restaurant, and seating along the other wall and down the back. There is lots of dark wood - on the bar, shelving, and overhead - fornica, stainless steel, leather... you know the look. Checkered vinyl flooring. Old-school cushioned stools like you'd find in an American diner. There are autographed photos, prints, and a faded painting of a bit of coastline. Mid-bar, there's a glass-cased cabinet housing desserts: rich-looking cakes that look like they've been refrigerated for too long. All in all, it's kitsch and entertaining, but also untidy and drab.

On entering, we were barely acknowledged by surly-faced Italian men who sort of indicated we should sit wherever we felt like. For the novelty, we sat on the two remaining stools along the counter, pretty much in the middle of the action. Across from us, just behind the counter, was the cash register, which soon became annoying as other patrons paid in between our shoulders - which was not discouraged by the staff. Other patrons were handed their plates in the same manner. Arms everywhere! Dodging all this, we tried to read the menu.

Problem #2. I'm not exactly old - okay, I'm 30; make of that what you will - and I don't need glasses (yet). But I could barely read the menu. It was only perhaps two metres away, hanging overhead, and fairly limited. But the writing was so faded on the dark wooden background, I couldn't make out half of the words. When I could, I still didn't know what to order, because there was no explanation of the pasta types or sauces.

I get it: there's a charm in having a communal menu, lots of wood, keeping it simple, never veering from much-loved traditional dishes, etc etc etc. But DUDES, this place has one purpose: to sell food and drinks. Imagine how many customers could be turned off by not even being able to read, and therefore choose, the food that they are there to buy. A l'il silly.

To be fair, Surly-Faced Italian Man #1 offered to explain any dishes if we needed it. But (a) I couldn't read the names to know which ones to ask about, and (b) he was pretty busy, distracted by other staff and customers, and soon forgot about us. So I just picked one of the two specials we'd been hurriedly told about on arrival.

Some white bread was plopped in front of us - nice enough, sure; but no butter, tut tut - and we ordered a watermelon granita each: pink, relatively flavourless slushies. Other than coffee, I'm not even sure there are any other drinks available. About two seconds after ordering, our food appeared (are all the dishes ready on a conveyor belt running round the kitchen or something?), and it was okay. It was really nothing to write home about. Frankly, I prefer my Mum's bolognese. And she's not even Italian.

We were hungry, so we ate, then paid - about $20 each; basically the only part of our visit that wasn't unpleasant - and departed.

I don't care if it's an institution. That's probably the only way it survives. Pellegrini's, lift your game.