July 14, 2015
The shops along Domain Road, South Yarra have a reputation for being a bit posh. It is South Yarra, after all, and the majority are cafes and restaurants that take advantage of their location (opposite Melbourne's Royal Botanic Gardens) by providing some outdoor seating. Apparently The Real Housewives of Melbourne even frequent one or two venues along the strip.

A little further down the road, on the corner of Millswyn Street, Entrecôte (131-133 Domain Road, South Yarra) is having a party of its own - still refined, but with a little more colour and personality. In operation as a Parisian-style steak bistro since January 2015, the restaurant offers breakfast, lunch and dinner seven days a week in the former site of the infamous Lynch's Restaurant. 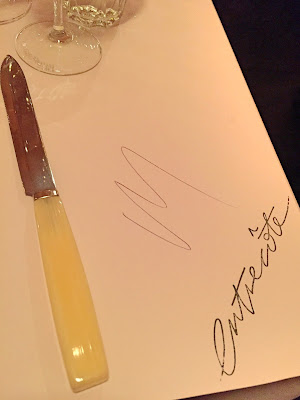 Business partners Jason McLaren Jones and Adam North developed the idea when they bumped into each other in Paris in late 2014. They took a meal together at the institutional Le Relais de L'Entrecôte: a no-bookings bistro that serves only steak with only one sauce. Although they had not been looking to open a French restaurant in Melbourne, they loved the concept, and it so happened that owners of the site, Di and Peter Pausewangs (friends of Jones'), were seeking a tenant. Jones also operates The Stables of Como, Moor Please and Friends of Mine, plus formerly Prix Fixe, which has since closed and will soon house a second Melbourne Entrecôte venue. North, of beef producer Hopkins River Beef, was the ideal partner for a steak restaurant. 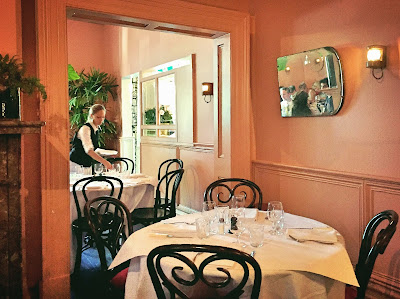 Taking a leaf from Lynch's book, Entrecôte is obviously also French-focused, but design-wise, it has retained some of the more frivolous aspects of Lynch's interiors. (Happily, it waived the 'no kids' policy that Lynch's had maintained for its 30-plus years of existence.) The building is basically a two-storey historic house converted for commercial use. Rather than one big dining space, it comprises several rooms, each with its own design scheme. Interiors for the restaurant were collaborated on by Jones and designers Brahman Perera and David Flack of Flack Studio. The black-and-white front room feels like a conservatory: all window panes, hard surfaces and cushioned bench seating. Two adjoining dining rooms to the right of the corridor are salmon pink - not the most attractive choice of colour, in my opinion. It's a hue that sits somewhere in between tongue-in-cheek tacky and warmly classy. Upstairs is a mint green dining room for private functions. Fireplaces, antique mirrors and leafy pot plants are dotted around the joint. It's all very European-shabby-chic meets 1980s-Country-Club. 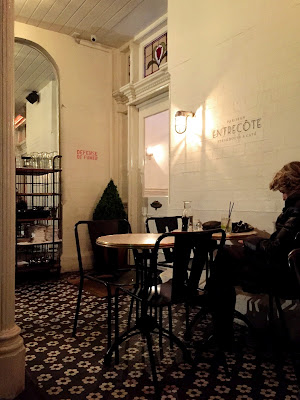 The outdoor patio at the front is clean, sharp and very French. Black and white reigns supreme, with tiled flooring and small tables (plus a retractable awning and heaters in winter, should that be a concern). It's a lovely spot to sit in summertime, with a glance over the road to the bit of green that marks the southern edge of the Botanic Gardens. 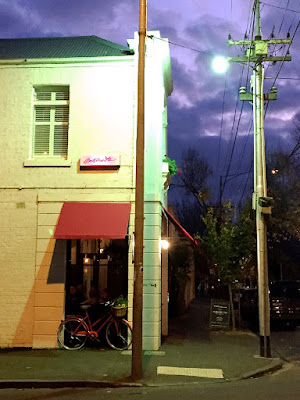 Champagne is the go-to drink here, but the wine list is extensive and, in keeping with the area, rather on the pricey side. Happy hour (4pm to 6pm) lightens the deal somewhat, offering $12 Mumm and $2 oysters. Coffee is available all day via the takeaway window on the Millswyn side, and European breakfast fare is on offer between 7am and 3pm daily. 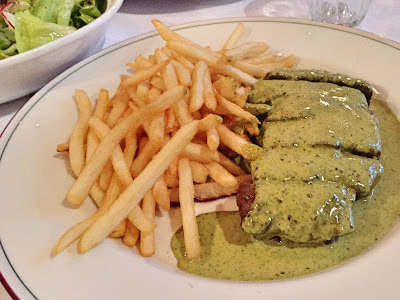 The steak (a flat - and I think, reasonable - $39.90 per person) is the main reason why people dine at Entrecôte. The idea is to do one thing consistently, and therefore do it well. (Not the steak 'well done', mind - that would be a travesty in the restaurant world!) In a cute quirk, your waiter will ask how you'd like your steak done, and then scribble it on the paper table run in front of you. 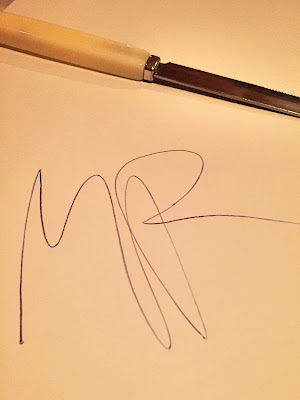 However you like your steak, the Hopkins River porterhouse is grilled to perfection by Executive Chef Jason Rodwell (ex Albert St Food and Wine) and his team. Only one sauce is available: a secret, herby, eggy, buttery concoction, containing mustard and anchovies, that original head chef Simon Moss was sent to France to knuckle down, and that was perfected over eight months. Although I like the sauce, and it does go well with steak, I would prefer to determine the amount of sauce on my steak by pouring it myself. So -- on the side, please! 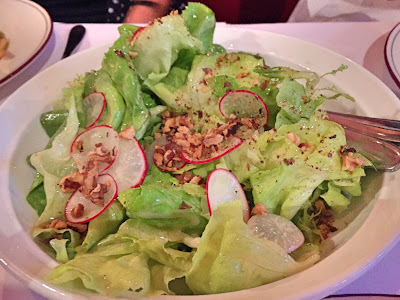 As per the tradition of French steak bistros, the steak comes accompanied by fries and salad, both of which can be topped up upon request. The fries are fine - relatively standard, thin and salty - but the salad is one of my favourite parts about a visit to Entrecôte. Its butter lettuce is soft and fresh, scattered with walnut pieces and finely sliced radish, and it is dressed to perfection by a light Dijon vinaigrette. The chunky baguette delivered before your steak is also excellent, but served with annoying, individually wrapped butter portions. 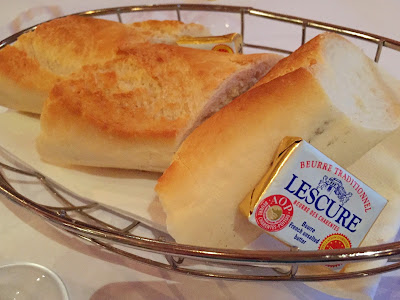 Alternatives to steak are available for vegetarians and pescetarians upon request. Small accompaniments such as a gougere or French onion soup are probably unnecessary with your steak, but look delicious. We had an entree of oysters, which were good quality, not unnecessarily laden with extras, and hit the spot. 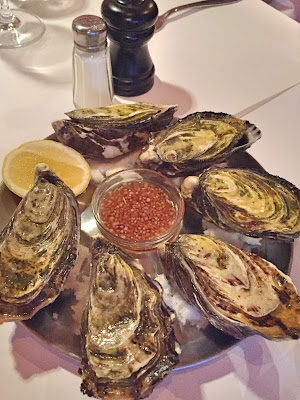 A bar menu is offered on the patio with other smaller bites (including terrine, gravlax and a house cheeseburger) and of course, there is an array of rich sounding, mostly cream-based desserts to choose from. 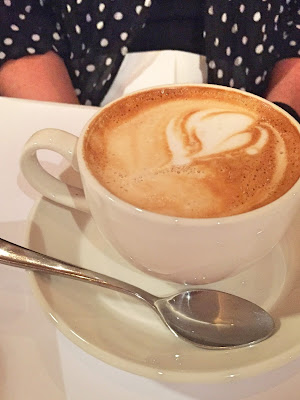 The penguin-suited waitstaff are generally attractive and European, while their service is polished and a little snooty - not offensively so, but just enough to make you feel like you're in France. All part of the experience, I suppose! 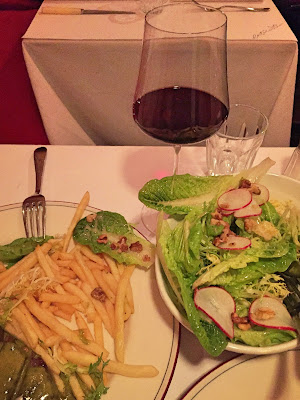 Lunch and dinner are served from midday to midnight, making Entrecôte excellent for a late lunch or dinner - with a better chance of a table. Six months into trading, it's still quite popular, so be aware that its 'no bookings' policy might work against you at peak times. If you're a steak kinda person, Entrecôte should be a must-try on your list (...or you could always try one of these). Just make sure you have the South Yarra attitude down before you go. 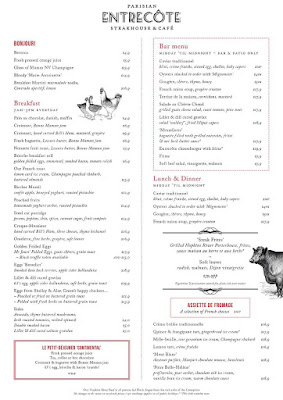