October 08, 2013
Ramen, udon, pho and all things Asian-noodley have been far less prominent in my life since I moved from Sydney to Melbourne. Finally, it seems the awesomeness of tasty, cheap Asian food is filtering more into Melbourne's foodie radar, and there's much more choice around town these days. Shop Ramen (329 Smith Street, Fitzroy) is tapping into the trend, with great ramen on offer, endorsed by the hordes of hungry punters at the door.

Shop Ramen's roots sprouted in February this year as Shophouse Ramen, a staggeringly popular, 10-day pop-up at Storm in a Teacup. The brainchild of experimental foodie and blogger, Pat Breen, the pop-up's success led to its new, permanent residence up the road (just south of Johnston Street). 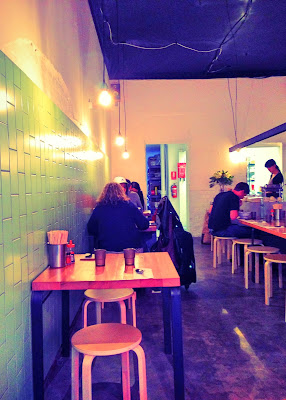 Owners Breen and Lydia Wegner travelled to Japan to master the art of ramen, adapting its traditions into a compact yet flavour-filled menu. The three ramen dishes currently on offer feature wheat and rye noodles hand-made on-site, and are finished with a soft-boiled egg - a delicious homely touch. 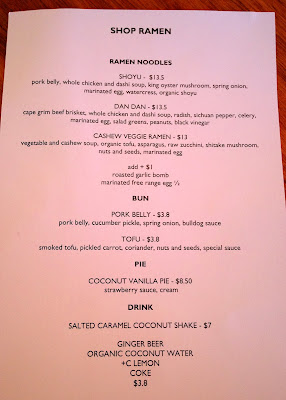 After missing out on a table on my first attempt (mainly due to the oh-so-Melbourne no-bookings policy - oh, and some distracting drinks at the corner pub beforehand), friends and I grabbed the window table for an early dinner one Thursday. They all went for the Shoyu, a pork belly and chicken affair, and the more traditional of the dishes on offer. Sadly, no one sampled the Dan Dan (possibly put off by the words 'brisket' and 'sichuan pepper' in its description?? -- the others just sounded more appetising). Personally, I'd like to see two Dans go in together one day and share a Dan Dan. *giggle*

I had the Cashew Veggie Ramen, a vegan-friendly option: wonderfully rich and creamy, due to its cashew milk base. Predictably, I couldn't finish it - but I sure enjoyed trying! It was a hearty, flavoursome, and very reasonably priced meal that I will absolutely be returning for.

The consensus on the pork buns was generally positive, but my (unpopular) opinion was 'thanks but no thanks'. I found the dough oddly smooth and too shiny, which I guess made the buns look processed, even though they're probably anything but. The pork within was alternately fatty and dry, and the 'bulldog' sauce was overpowering and, frankly, not that pleasant. I had a much nicer time with the tofu bun (and despite these leanings: no, I'm not vegetarian or vegan). Its flavours and textures were more balanced, and fresher.


Drinks are also limited: there is the odd option of a salted caramel coconut shake, apparently PHENOMENAL, but not something I would've thought to pair with Japanese food. I had an 'organic' coconut water, expecting something closer to a natural state than the poppa-style container it came in... but it was still nice. Shop Ramen's alcohol license is yet to come; a final touch on a new venture that, I think, will seal the deal on its good name.

Another slight downer is the hours. Although open for lunch and dinner -- closed Monday AND Tuesday? On Smith Street? C'mon, guys! I'm hungry EVERY day of the week. While we're at it, please introduce takeaway, and outdoor seating in summer would also be great. Kthanxbye.

On the upside, service was consistently helpful, and despite the crowds greedily eyeing our table, we weren't rushed out the door.


The venue itself is no-frills, with bare tiling, cement flooring, wooden tables (including one long communal table), sparse lighting and plastic cups. Frills are not needed here, though - the sparkle comes from the ramen. It's pretty spectacular. Get some o' this ramen into ya, Melbourne.